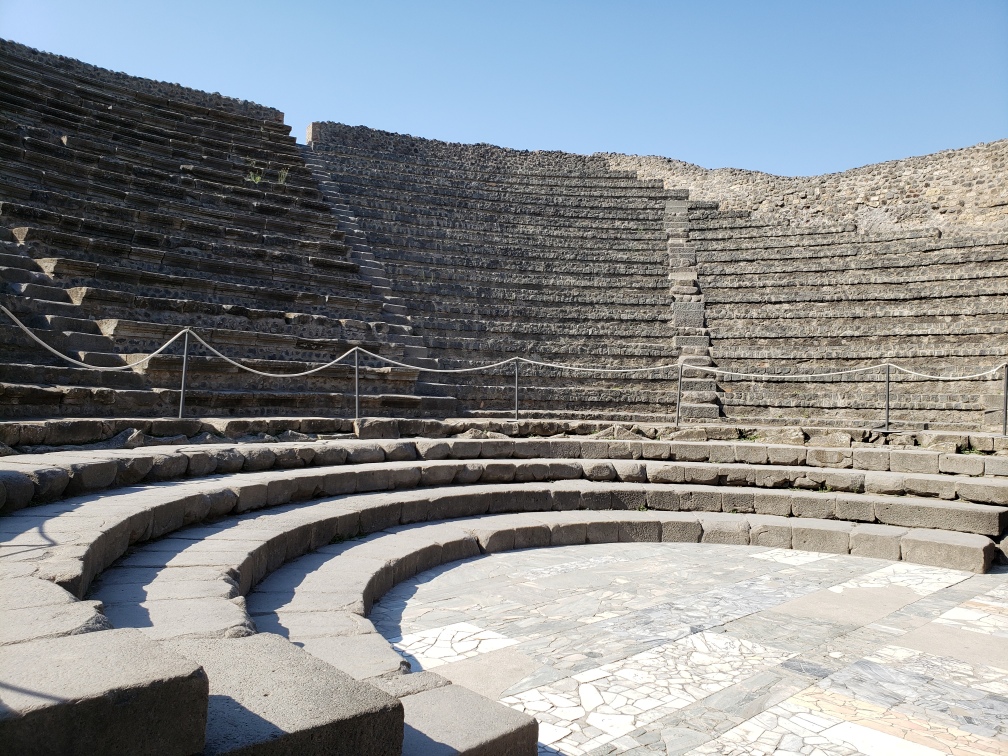 In 79 AD, Mount Vesuvius erupted, sending a pyroclastic flow of 250 degree Celsius gas and ash flooding down the slopes at 200 kilometres an hour. The force coming from the top of the mountain has been compared to 250,000 elephants being spewed out every second. About 2000 residents of Pompeii died, the theory being that their blood boiled before they could perish of suffocation. How horrible.

We went to visit Pompeii and Vesuvius. Much of the ancient city has been unearthed from its 25 metre covering of ash. We walked the cobblestoned streets and I felt into the lives of people who had similar joys and sorrows to me 1940 years ago.

I could have bought the audio contraption that would tell me about all the buildings but I knew that wasn’t the right choice for me. I needed to be with the spirits of people who have come before. Someone built these walls, these ovens, these theatres. Their lives were likely shorter than mine but no doubt just as rich. I wanted to walk the narrow streets with old friends.

Through a window hole, I glimpsed a tiny semicircular theatre. “Please, may there be a way that I can get in there!” And there was. A passage opened up to the simple grandeur of the stage and stone seats. There were maybe twenty of us standing and sitting in the space. I heard an English-speaking tour guide say that if you stood in the very centre of the stage and spoke, the sound would come back to you. And yes, it was true. A rich vibration returned.

I knew what I wanted to do. I wanted to sing Leonard Cohen’s Hallelujah to the Pompeiians. Folks came and went from the theatre and I despaired that I would never be alone there. I didn’t want to intrude into the well-being of the ones who were already present.

Maybe half an hour later, a family of four walked away from me. “Ciao.” No new people entered. It was time.

I pulled out my phone, found the lyrics and lifted my head to the gallery of ghosts. I sang … the whole thing. I felt the sweetness inside of throwing myself into their world. My peripheral vision told me that I had visitors, but I kept going. I felt the contraction and I let it go.

As the last “Hallelujah” hung in the air, I turned to see smiling faces and brief applause. Thank you, dear audience. It wasn’t a performance, however. It was a communion.